The Grand Tour step by step 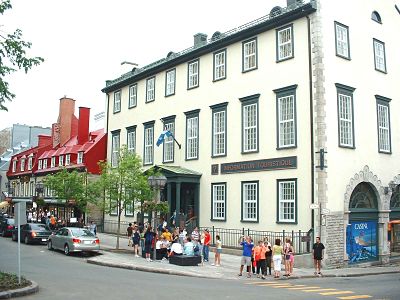 The Grand Tour departs from Tours Voir Quebec’s sales desk located inside Quebec Tourism Information Centre (12, rue Ste-Anne), across from the park with a fountain in front of the Chateau Frontenac. This route is subject to change without notice.

The Grand Tour begins with a stop at Place d'Armes (Armoury Square), right at the heart of the Old Town, with a general introduction to the history of Quebec City and its importance in time.  The Dufferin Terrace with its breathtaking view of surrounding landscapes, the St-Lawrence River and Quebec City’s Citadel / Musée Royal 22nd Regiment follow.

The tour then curves around famous Chateau Frontenac and enters the shade of the Governors' Garden. At this point, next to the unique Wolfe-Montcalm monument, The Grand Tour pauses to recapture a few of the most notorious events and people in Canadian history whether they came to life on the Plains of Abraham or at the nearby Chateau Frontenac.

From then on, it follows the charming streets and alleys of the Old Town and introduces the peculiar architectural elements and restrictions applied to Old Quebec City. It cuts through such hidden courtyards as the Old Bastion of the Mill (a defensive system built in 1693) and reaches St. Louis Street before proceeding past "La Maison du Général", a reminder of the 1775-76 Invasion Army commissioned by George Washington himself.

The Grand Tour makes a right turn on Du Parloir Street to access the courtyard of the Ursuline Sisters. It is time for rich anecdotes, in hushed tones, resulting from the Ursulines' presence in Town since 1639. When possible, a peek at their beautiful chapel with nearly 300 year-old interior is recommended! All the while, your guide makes sure that you don't miss interesting hidden particularities of buildings as seen through his/her experienced eyes.

Following, The Grand Tour meanders down narrow Donnacona and des Jardins streets before entering the courtyard of Holy Trinity Anglican Cathedral (1804).  Next comes City Hall and its castle-like architecture. Across from City Hall square, the tour enters the interior courtyard of the Seminary without forgetting relevant and interesting facts about Basilica Notre-Dame de Québec (the first Roman Catholic Cathedral erected north of
Mexico). Exiting the Seminary through the narrow winding streets of the once-called Latin Quarter, it proceeds along the northern portion of the defensive walls to capture the prominent past of Quebec City's port.

Always following a downhill path The Grand Tour reaches St-Paul Street and enters the Antique Dealers District where very good restaurants are located. It then follows old Sous-le-Cap Street, once used by Benedict Arnold during the siege of 1775, before entering the former financial district of St-Pierre Street with its imposing architecture Museum of Civilization stands nearby.

The final destination is the oldest part of Quebec City: Place Royale. Being the town's birthplace, time is taken to explain the restoration work involved as well as viewing quaint Notre-Dame-des-Victoires church (built in 1688). Before coming to an end, the Grand Tour curves towards Sous-le-fort Street and reaches the very foot of Cap Diamant with the ever imposing Chateau Frontenac towering above

As the tour comes to an end, participants may elect to spend some more time in the Lowertown, go for a boat or ferry ride or simply return to Place d'Armes (the Funiculaire and the Breakneck staircase are located nearby). You may also wish to share a few more anecdotes and comments with your guide. Whatever you decide, we can assure you that The Grand Tour will constitute one of the highlights of your stay in Quebec City.

Removing a product in your shopping cart

Are you sure you want to remove the following product from your cart?