The Bury Your Dead Tour

Also available as a private tour

« As Quebec City shivers in the grip of winter, its ancient stone walls cracking in the cold, Chief Inspector Armand Gamache plunges into the most unusual case of his celebrated career. A man has been brutally murdered in one of the city's oldest buildings - a library where the English citizens of Quebec safeguard their history. And the death opens a door into the past, exposing a mystery that has lain dormant for centuries...a mystery Gamache must solve if he's to apprehend a present-day killer. »

Based on Louise Penny's Best-Selling Novel 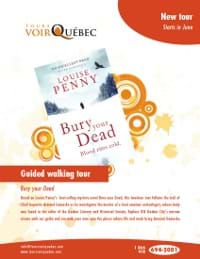 Based on Louise Penny’s best-selling mystery novel Bury Your Dead, this two and a half hour long tour follows the trail of Chief Inspector Armand Gamache as he investigates the murder of a local amateur archeologist, whose body was found in the cellar of the Québec Literary and Historical Society. Explore Old Québec City’s narrow streets with our guide and see with your own eyes the places where life and work bring Armand Gamache.

« Gamache's excruciating grief over a wrong decision, Beauvoir's softening toward the unconventional, a plot twist so unexpected it's chilling, and a description of Québec intriguing enough to make you book your next vacation there, all add up to a superior read. Bring on the awards. »
- Kirkus Review

Marie Legroulx, one of our senior guides and a former literature instructor, is the instigator of the Bury Your Dead Tour offered by Tours Voir Québec  since 2013.  This tour attracts an ever-increasing number of visitors to Québec City. Many of them have even told us that our Bury Your Dead Tour was the highlight of their time in Québec.

The Bury Your Dead Tour starts at the Quebec Tourist Information Centre (12, Sainte-Anne Street).  Among other landmarks mentioned in the novel, the tour stops at the Notre-Dame de Québec  Basilica, the Literary and Historical Society (Morrin Centre), and Émile Comeau’s house. We’ll also see where French General Montcalm died after the Battle of the Plains of Abraham. The tour ends on the Place d’Armes.

Please note that the Bury Your Dead Walking Tour is offered both as a scheduled tour at fixed times or as a Private Tour. Ask about our rates for a private tour, offered year round.

In 2022, Bury Your Dead Tour scheduled departures are offered every Wednesday and Saturday at 1:30pm, between May 1st till October 31st.

We ask a minimum of 2 people to guarantee a departure.

Locate Chateau Frontenac, then walk across the park

The Bury your dead Tour departs from Tours Voir Québec’s sales desk located inside the Quebec Tourist Information Centre (12, rue Ste-Anne) across the park from highly visible Chateau Frontenac. Pay parking is available underneath Quebec City Hall and street parking meters, along rue des Remparts. Bus routes (3, 7 & 11) stops nearby. No need to use your car. Cancellations will be accepted up to 24 hours prior to tour departure.

If you are planning on visiting Three Pines you may want to do the Three Pines Tour. They take you on a journey through fabled Three Pines and follow what inspired Louise Penny to write such great novels.

Unearth the canvas where Armand, Clara, Myrna, Ruth, Gabri, Olivier, and Reine-Marie come to life in the printed word. The tour comprises a mélange of locations that have triggered Louise’s imagination and will captivate yours too. This tour is presented in five Chapters.

Removing a product in your shopping cart

Are you sure you want to remove the following product from your cart?